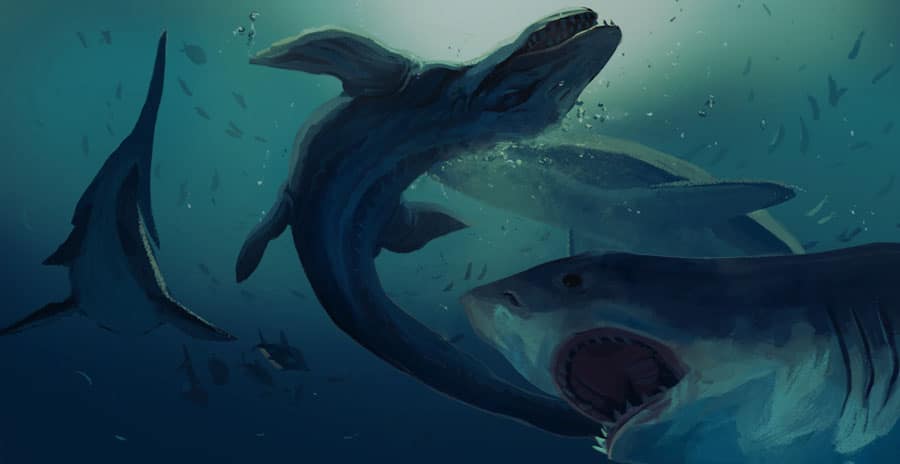 Sharks are older than dinosaurs. They’ve stood the test of time and are almost exactly the same as they were all those millions of years ago. It begs the question: why haven’t sharks evolved?

Sharks have evolved, it just doesn’t really seem like it. Sharks have no known predators so they dominate their ocean landscape. As long as their dominion remains the same, they have no reason to adapt in a large way.

Let’s take a closer look at why sharks are the true kings of their habitat and how that notion might apply to us as well.

Just like in my article all about crocodile evolution, the easiest way to see the difference between the ancient sharks and more modern sharks is in their size.

The biggest shark in the world right now is the whale shark. Some whale sharks have been known to reach lengths of about 13m (just over 40 feet). Not too bad!

The biggest prehistoric sharks, however, grew to sizes of nearly 24m (over 70 feet)!

Sharks have evolved their size based on prey and environments throughout the years. They were bigger when there was bigger prey.

What I find interesting is how nature tends to strike a balance between carnivores and herbivores. As herbivores get bigger so do carnivores.

This is most evident when you look at how crazy big some of the dinosaurs got in the Jurassic period!

One other major example of shark evolution lies in their brain size. Some of the early sharks some 400 million years ago had way smaller brains than the sharks of today.

How Sharks Show a Different Side of Evolution

Sharks, and crocodiles, show how evolution actually truly works. Evolution is nature’s way of sifting through all of the earth’s species and finding the ones that adapt better than others.

Sharks are the best evolved for their environment and have been for millions of years.

The only evolution we’ll likely see in the future with these apex predators is their size and intelligence. Just like how they got bigger through the different dinosaur periods, we might see sharks get larger again if their prey grows in size and population.

Sharks could get smaller, as well. It really could go either way.

What Sharks Evolved From

The first fish appeared about 510 million years ago. They were small and jawless, not exactly prime elements to be survivors.

Sharks clearly had an evolutionary edge when they came onto the scene about 400 million years ago. Their teeth and jaws gave way to new predatory ambition and sharks took over the oceans. They’ve stayed on top ever since!

Just like crocodiles, sharks did not evolve from dinosaurs. They’re all completely different species from each other, evolving in different ways.

How Sharks Survived the Dinosaur Extinction

Around 65 million years ago, scientists believe a giant meteor came and struck the earth in the Gulf of Mexico.

One major theory is that the area was incredibly rich in oil and because of that it caused excess amounts of carbon dioxide and fumes to flood the atmosphere, blocking out the sun and disturbing photo synthesis in the vegetation.

I wrote an entire article about fossil fuels and how oil may have helped kill the dinosaurs. Check it out!

The dinosaurs perished, but there were some species that survived and thrived! Two of the major ones that I’ve discussed are crocodiles and sharks.

In my article about crocodiles, I mention that the reason they might have survived is because they were cold-blooded and required a lot less energy from feeding.

Guess what? Sharks are also cold-blooded!

It seems safe to say that the reason that they survived is because they were cold-blooded.

Are sharks primitive? Depending on the definition of primitive, yes and no. They are primitive in the sense they come from an ancient species line, but are sophisticated in the sense of evolutionary traits. They have exceptional senses of smell and also an electrosensory system that allows them to sense the muscle movements of animals in the water.

Sharks are scary, no matter what scenario you find them in. They can rip apart prey like no tomorrow and have the swimming skill of Olympians. Not only did they exist in the prehistoric, they were also bigger. Let that visual sink in!

Aside from size differences, sharks today largely remain the same as their ancient ancestors. I guess when you’re the king of your domain there’s no need to change. Either way, don’t go in the water. Dun dun, dun dun.

link to Did Dinosaurs Sleep at Night?

Continue Reading
link to What was the Longest Dinosaur?

Ever since I first saw that amazing shot of the brachiosaurus clipping some leaves off a tree in Jurassic Park, I've been mesmerized by the crazy size and length of some of the dinosaurs. It really...