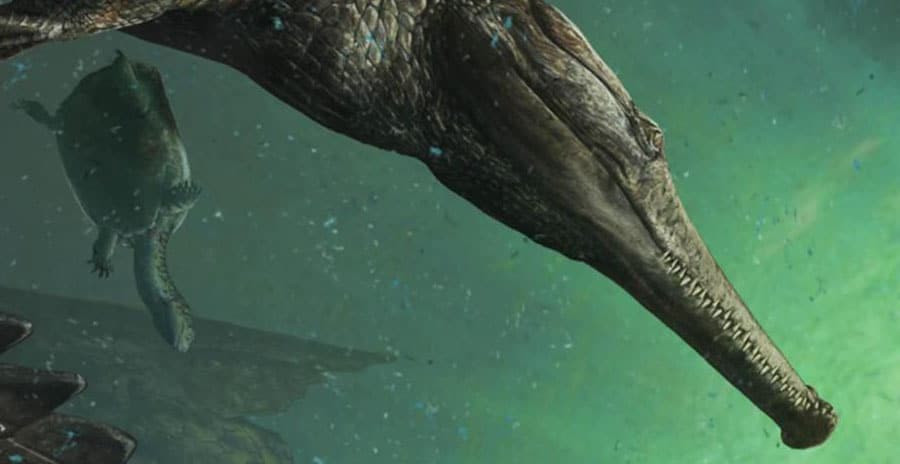 It’s common knowledge that crocodiles existed back in the days of the dinosaurs. Crocodiles are also in our modern world and seem pretty much exactly the same. It really makes you wonder: why haven’t crocodiles evolved?

Crocodiles actually have evolved, they’ve just changed in really small increments over the years. The crocodile is at the top of its food chain and has no need for large evolutionary changes. It’s an excellent example of when evolution reaches it’s peak.

Let’s chomp down on some croc knowledge and find out how these bad boys have stayed on top all these years.

The first, obvious example of crocodile evolution is their size. Crocodiles back in the prehistoric days were much larger than the crocodiles of today. There were some prehistoric crocs that were more than 30 feet long, as big as some medium sized dinosaurs. If you’re interested in finding out what the longest dinosaur was, feel free to check out my full article about dinosaur length.

Surprisingly, the very first “crocodiles” were actually small, bipedal creatures (walked on two legs). Some were even vegetarians. Very different than modern day crocs for sure.

As you can see, crocodiles have changed sizes quite a bit over the last 250 million years. Whether big or small, crocodiles have proven over and over again that they are here to stay and maintain a long species lifespan for a reason.

Another major example of crocodile evolution is found more in the prehistoric time. As I mentioned earlier, some of the original crocodiles actually walked on two legs instead of four.

If you look at modern day crocodiles, you’ll see that their hind legs are longer than their front. This is remnants of when they switched from walking on two legs to walking on four.

Also, the original crocodiles were land dwellers that were much faster and could hunt prey better. It’s thought that some time in the middle of the Cretaceous period, perhaps because of their thriving cousins the dinosaurs, crocodiles were driven into the water. Their bodies evolved to be more sleek and their head structure better suited to being underwater for extended periods of time.

How Crocodiles Show a Different Side of Evolution

“Because of evolution, some animals, like crocodiles, have been on top for a very long time.”

When we think of evolution, we usually think of all of the extreme changes species go through to adapt to their surroundings. Fish in the deep, dark ocean gaining lights on their heads to see, chameleons having the ability to change color at will to blend in, woodpeckers having the physical structure to be able to rapidly smash their faces into trees for grub and other things.

But one side of evolution that we don’t think about is the kind that shows little to no change at all. Because of evolution, some animals, like crocodiles, have been on top for a very long time. They gained all of their strongest evolutionary traits millions of years ago.

In essence, crocodiles prove (almost in the best way) that evolution does truly work. Species continually change and adapt to try and become the best they can be in their particular environment. None of this is on purpose, it’s all through physical adaptations, but it still goes to show how important change can be.

It’s also important to note when change isn’t necessary anymore. Crocodiles have evolved and they’ve been reaping the benefits for ages. If only we could do the same!

What Crocodiles Evolved From

A common question most people ask when it comes to crocodiles and dinosaurs is: do crocodiles come from dinosaurs?

The best way to understand the relationship between crocodiles and dinosaurs is to consider them siblings or cousins. Their connected ancestor is the archosaur, which essentially was the godfather of prehistoric life. I’ll be going into much more detail about this in a future post so come back and check that out!

Crocodiles are cold-blooded, just like dinosaurs are considered to be (or atleast they used to be), so their similarities are evident. They also look quite a lot like dinosaurs, so it’s definitely an easy mistake to make.

How Crocodiles Survived the Mass Extinction Event That Killed the Dinosaurs

We all know that crocodiles and dinosaurs shared the planet for a very long time. They were cousins, as we established, and remained that way until one major event. A meteor came out of the sky and crashed into the planet, creating an extinction level so massive it wiped out all of the dinosaurs in nearly one foul swoop.

Yet crocodiles remained. We can go to zoos, or walk close to swamps and see evidence of their survival today.

Why did the crocodiles survive? How are they so different from dinosaurs that they were spared?

Some theories have come around to explain what might have happened.

New research is showing the possibility that dinosaurs might have been warm-blooded. If that’s true then it might have been a contributing factor to their demise. Warm-blooded creatures need to eat on a regular basis to maintain their metabolic levels.

When the meteor struck the earth and the food started to become scarce, not to mention the environment more cold, the dinosaurs would have found themselves starving/freezing to death rather quickly.

Juxtapose that with the cold-blooded crocodiles. Not only do they need far less food to maintain metabolic levels, they also resided in the water which would have been far less effected by the meteor blast and also provided more varieties of food.

I wrote an entire article about shark evolution that is surprisingly similar to the crocodile’s evolutionary journey. Check it out if you’re curious how sharks survived the dino-killing extinction: hint it’s in their blood.

One thing that’s kind of interesting is the fact that only the smaller crocodiles survived. It goes to show that size might have been a factor for survival after the meteor struck. Being big back then most likely got you killed.

What is the least evolved animal? The oldest living species is technically a bacteria. Cyanobacteria dates back nearly 3.5 billion years and is located literally all over the world. It’s considered Earth’s oldest organism.

Why have extinct animals not re-evolved? Once a species goes extinct, there’s no way to technically re-evolve the exact same genus. There may be species later that have similar appearances or evolutionary traits, but that extinct genus is gone forever.

Crocodiles prove that evolution doesn’t always have to be drastic and occur often to be effective. They seem like they haven’t evolved but they actually have.

Crocodiles supreme control of their environment is impressive and they are not given the credit they deserve. They show how a species can stay on top and perhaps we can learn a thing or two from them. See you in a while, crocodile.