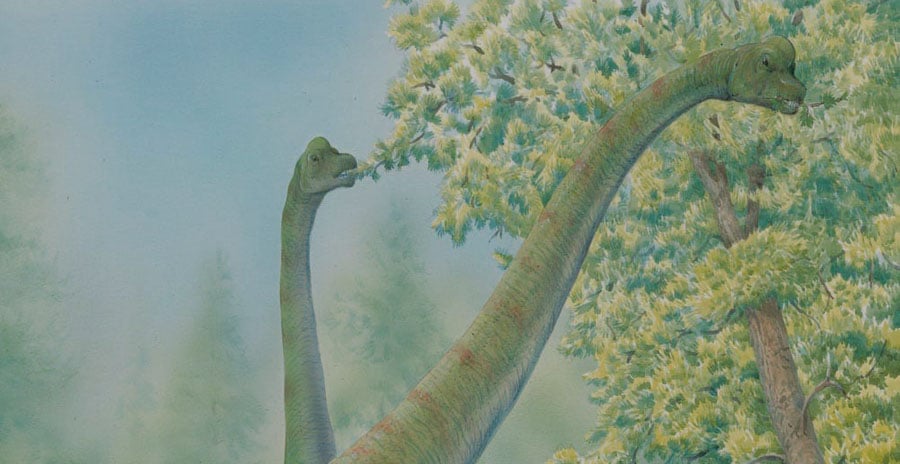 Ever since I first saw that amazing shot of the brachiosaurus clipping some leaves off a tree in Jurassic Park, I’ve been mesmerized by the crazy size and length of some of the dinosaurs. It really makes you wonder, though: what was the longest dinosaur?

Prepare to feel small as we explore the nature of the biggest and longest creatures to ever roam the Earth. We’ll look at how long they really were, how they got to be that big and how it ended up eventually working against them.

Here’s the top 9 list of longest dinosaurs of all time (from wikipedia’s dinosaur size page):

The clear winners overall are still the sauropods. Their long necks made them quite a lot longer than any of their dinosaur contemporaries. Even some of the smallest sauropods were still quite a bit bigger than the other dinosaurs around at the time.

Now that we’ve gone over the top 9 longest dinosaurs of all time (all of which are herbivores, by the way) we need to find out how long the carnivores were.

Really, this is the more important question because if we ever find a way to bring dinosaurs back, or we invent time machines to go back in time, these are the dinosaurs we’re going to be running away from!

So lets give some other herbivores some love now and see which non-sauropod herbivores were the longest.

Why Dinosaurs are Measured in Length and not Height

While doing research for this article I found it really tough to find the heights of the different dinosaurs. I scoured sources and came up with very little data.

After reaching out and speaking to Wendy Taylor at the Royal Tyrrell Museum of Paleontology in Alberta, Canada, she informed me that “Palaeontologists only measure the height of the hips because that is the only non-negotiable part of the skeleton. No matter what the posture was in life, whether they held their heads high, whether they walked on two legs or four (or both), the only scientific measurement can be the hips. People take guesses, but they aren’t accurate in any way.”

I had hoped to use heights to give a better comparison of size between humans and dinosaurs but it’s not a measurement that is used in sizing the dinosaurs.

How the Dinosaurs Got So Big

We can’t have a post about dinosaur lengths without going over how they got that size in the first place.

There are several theories as to why and how the dinosaurs were so big.

One of the earliest theories for the dinosaur’s giant sizes had to do with the oxygen levels back then. It’s been thought that the air contained more oxygen and therefore allowed for larger creatures.

There has been evidence, more recently, found in some amber that proves this theory false. The oxygen concentration found in the samples were actually lower than today, so there was no way that the air was a factor.

The main theories/factors most scientists believe allowed for dinosaurs to be so large, and especially sauropods, are as follows:

Just like feathers were an evolutionary trait to maintain body heat for some dinosaurs, these dinosaurs evolved certain traits to be able to grow to unimaginable sizes.

There could be a lot of other reasons as to how the dinosaurs got as big as they did but these are the major theories out today.

What’s cool about dinosaurs – and why I love learning about them – is we continue to learn more every year.

Have you ever heard of that saying ‘all good things must come to an end?’ That’s exactly how it went for the dinosaurs.

Don’t get me wrong, they lasted for millions of years which is incredibly impressive. But in the end their fate was sealed.

Dinosaurs in the Jurassic period reached sizes so large they towered over trees and were the size of buildings. I wrote an entire article about the different dinosaur periods, where I go into detail about how dinosaurs evolved over the millions of years they ruled the Earth.

Factors, like we discussed previously, came in to play that allowed the dinosaurs to grow beyond anything before or since.

Their large size caused their own destruction at the end of the Cretaceous, however.

At the end of the Cretaceous, some 65 million years ago, it’s thought that a meteor struck the planet and annihilated most of its inhabitants.

The main victims were the dinosaurs.

The meteor caused an enormous amount of dust and other particles to go up into the sky, blocking out a lot of the sun and causing plants and vegetation to suffer.

Soon, the bigger dinosaurs started to perish due to lack of food, which then cascaded down.

There’s a good chance that a lot more happened here to cause their demise but I believe their size was a major factor.

The sheer size of the dinosaurs is part of what makes them so popular and why they have a mythical feel to them. How can beasts be so big? How did they get that big? These are all questions that inspire the mind and create wonder in our lives. Nothing that lives on land today stands up to these prehistoric monsters.

It’s actually somewhat humbling to know there were creatures drastically larger than ourselves. Hopefully we will some day see beasts these sizes walk on land again. But for now we can at least marvel at the beasts of our current age: elephants, giraffes, rhinos and more. We need to take care of what we have or they too will go extinct like the dinosaurs.