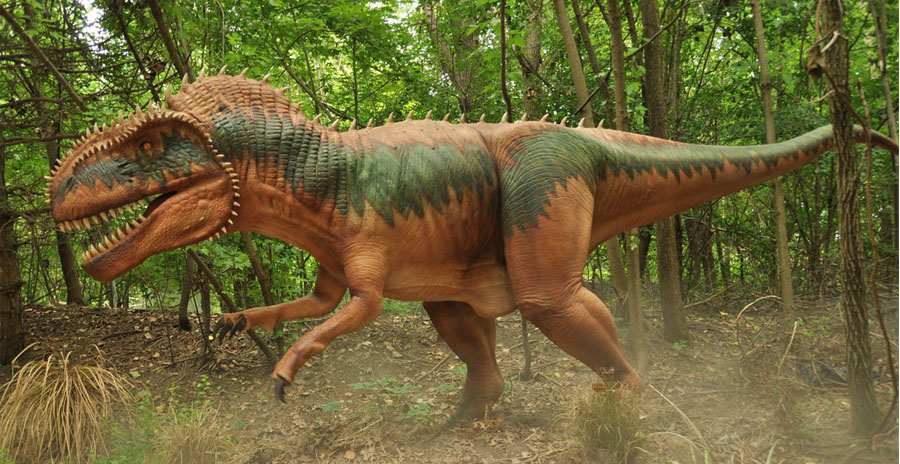 In doing research for this article, I came to the realization that it’s strange the megalosaurus isn’t more popular in mainstream media.

It has several critical distinctions that make it a very special dinosaur, yet hardly anyone knows anything about it. You mention the t-rex and it perks everyone’s attention (including mine) yet you say megalosaurus and most people are like “megalo-what?”.

I’m hoping this article can help to share the enormous impact the megalosaurus has had on Paleontology and other sciences.

Brief History of the Megalosaurus

According to wikipedia, one of the earliest known fossils, a femur, came from the Taynton Limestone Formation of Stonesfield limestone quarry, Oxfordshire in 1676.

If you want to learn how paleontologists dig up fossils, check out my article all about fossil excavation.

The specimen, which was later to be identified as a femur bone from a megalosaurus, was given to Robert Plot who was a Professor of Chemistry at the University of Oxford. Plot published the findings in his work Natural History of Oxfordshire in that same year.

And so dinosaurs had their beginning in modern culture!

The megalosaurus was also the first dinosaur to be scientifically named in 1824 and was also added to the newly created species type Megalosaurus Bucklandii by Gideon Mantell in 1827, which he created in honor of William Buckland’s contributions.

The megalosaurus was a very big deal back in their time!

The first reconstruction of the megalosaurus was done by Buckland himself. He thought it actually was a quadruped (walked on four legs) and an amphibian: quite literally a giant lizard.

It wouldn’t be until quite a bit later that scientists and paleontologists would realize that all theropods were bipedal (walked on two legs). It didn’t help that there never was a full fossil collection of the megalosaurus, either. Bummer.

Here’s a brief list of the specimens that were available to Buckland back in 1824 (again, according to the megalosaurus page on wikipedia):

Not all of these specimens were from the same megalosaur, so you can imagine how difficult this endeavor was. It would be like trying to put together a puzzle when you don’t even have all of the correct pieces.

The megalosaurus was a theropod, which means it walked on two powerful legs and had smaller arms with clawed fingers (much like the t-rex, except three fingers instead of two). It used it’s long tail to help balance itself horizontally as it walked or ran.

The skull of megalosaurus is not well known, but the pieces that have been found show the head as proportionally larger than the rest of the body.

It had curved, sharp teeth to rip flesh off of other dinosaurs it would eat.

The megalosaurus is most known to be about 30 feet long (or about 9 metres) and about 10 feet tall (about 3 metres). If you’re interested in finding out the what the longest dinosaur carnivore was, take a look at my post about dinosaur lengths.

It’s weight is highly debated but was considered to be somewhere between 0.7 and 1.1 tonnes. To get an idea of how heavy a megalosaur was, think about how heavy a rhino is. Yeah, that’s pretty heavy!

The megalosaurus could run about 30 mph. If you’re curious about what dinosaurs it might have hunted based on its speed, check out my full article about dinosaur speeds.

What the Megalosaurus Ate

The megalosaurus was a carnivore (meat eater) and might have also been a scavenger. It’s thought by many that it possibly hunted stegosaurs as well as various sauropods (dinosaurs that walked on four legs and had long necks and tails).

A study done in 2010 suggests the megalosaurus was the apex hunter of it’s known habitat.

Some descriptions found in the 19th and 20th century claimed the megalosaurs hunted iguanodons through the forests of Jurassic Europe but they have since been found to be inaccurate. Skeletons of iguanodons found have shown they existed in a different time than the megalosaurs.

Where the Megalosaurus Lived

When the Megalosaurus Lived

The megalosaurus reigned during the Jurassic period approximately 181-169 million years ago. If you’re interested, check out my article all about the different periods of the mesozoic era. There’s a major surprise in the first two periods that even I didn’t know!

Some other notable dinosaurs that were around in that time include the brachiosaurus, allosaurus, dilophosaurus and stegosaurus. It basically was the original t-rex, minus the mainstream love.

For nearly a century after the discovery of the megalosaurus, every fossil found, regardless of the species, was categorized under the megalosaurus group. Megalosaurus was considered a “wastebasket taxon“, which basically means if the paleontologists weren’t sure what genus a specimen came from, it went into the megalosaur genus. It wasn’t until the early 19th century that dinosaurs started being properly categorized.

Here are the only valid discovered megalosaurus species (courtesy of wikipedia):

Megalosaurus helped with naming future dinosaurs by being the golden example of dinosaur naming conventions for decades. Megalosaurus was given a name before the phrase “dinosaur” was even coined for the first time. Talk about being ahead of your time!

Even with all of the interesting things about the megalosaurus, one of the biggest questions (atleast in my mind) is how would it fair against a t-rex. Why a t-rex? It’s my golden standard for carnivorous dinosaurs. Blame Jurassic Park, I suppose.

There’s a definite sway on the t-rex’s side here. For starters, the t-rex was nearly twice as tall and was 10 feet longer as well. Not only that but it’s weight was nearly 10 times greater. Also, it had a much larger and stronger bite than the megalosaurus.

Their respective running speeds were similar, with a slight advantage going to the megalosaurus.

So how does the megalosaurus measure up against the t-rex? Depends, as always.

The megalosaurus does not get the credit it deserves. Being the first dinosaur discovered should be a major deal, but for some reason it just mostly gets ignored. That being said, it’s been interesting learning all about it while writing this article!

I hope I’ve helped you learn something interesting about this legendary beast!

Perhaps one day we’ll be able to celebrate the megalosaurus the same way that we adore the tyrannosaurus. One can hope!