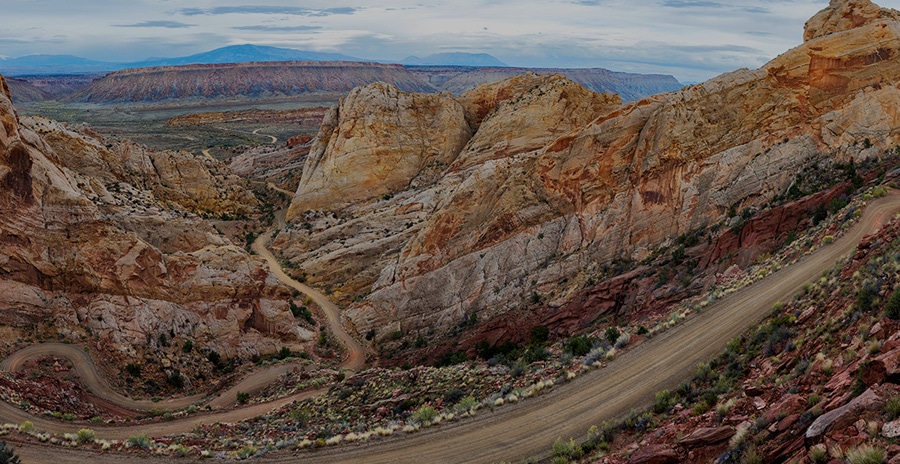 I had to get an oil change not too long ago and as I was waiting I got thinking about how oil is actually a fossil fuel. It got me wondering: Does oil come from dinosaurs? Did dinosaur fossils contribute to our modern fuel source? I got my phone out and started doing some research.

Oil does not solely come from dinosaur fossils. Fossil fuels instead mostly come from decaying microscopic organisms. Oil and gas deposits form when micro organisms blanket the sea floor, are buried under sediments and then have intense heat and pressure applied to it.

Most people equate the word fossil specifically to dinosaurs, but fossils cover a much larger spectrum. Fossil is simply defined as: the remains or impression of a prehistoric organism preserved in petrified form or as a mold or cast in rock. Key word is organism, not dinosaur! I know, not the answer you were looking for.

So, grab a coffee and let’s dig a little deeper into why we started thinking fossil fuels came from dinosaurs, how fossil fuels work in the modern world, how our resources might be more limited than we think and much more. I’m hoping we can all learn something cool today!

For hundreds of years people have been utilizing fossil fuels to create energy and improve life. Whether it was providing simple heat and light in homes, or powering massive cities and landscapes, fossil fuels are an integral part of our lives.

Anyone who drives a vehicle or enjoys a temperature conditioned home fully understands the massive impact these ancient fossilized deposits have made.

While I may sound like an advertisement for fossil fuels, the truth is we need them. Modern life relies heavily on energy, and there is no other energy source as accessible and affordable as petroleum and natural gas.

But where did it all start? How did we come to discover the massive potential of these chemicals and where are we headed with them?

According to Wikipedia, the first oil well started in Oil Springs, Ontario, Canada in 1858.

Asphalt and other petroleum components have been used for quite a lot longer, however, being used in ancient walls and other structures.

The different kinds of fossil fuels are:

Coal is by far the most common fossil fuel. Coal provides nearly a quarter of the world’s energy and close to 40 percent of the electricity. Coal is steadily declining in supply, much like the rest of the fossil fuels.

Oil (or Petroleum) is the bread and butter of the fossil fuel world. It’s the most widely used fuel source on the planet. Mostly used in vehicles and airplanes, oil reigns in the modern day.

How Fossil Fuel Extinction is Real

Just like the dinosaurs had, fossil fuels only have a limited time remaining on this planet. Because the fossilization process takes so long, we aren’t able to sustain the current fuel consumption levels.

Some say that we will be out of oil and natural gas in a half-century and coal in just over a century. What took millions of years to develop, the human race will have depleted in less than three centuries.

What does this mean for the human race?

Probably not a lot, to be honest. One of our greatest strengths as a species is our ability to adapt. We have the intelligence to think long term and see a bigger picture.

Many scientists and professionals are hard at work coming up with renewable, alternative fuel sources. Something large will be discovered in time to transition out of fossil fuels and into the next stage of energy production.

Why Oil Can’t be Only from Dinosaurs

While it’s definitely possible that some of our oil actually did come from dinosaur fossils, the vast majority would have come from much smaller organisms. There just simply wasn’t enough dinosaurs alive on the entire planet to be able to actually contribute to every oil and natural gas deposit discovered. The majority of the deposits are from micro-organisms, not dinosaurs.

We will never know how many actual dinosaurs contributed to our current fossil fuels. Any dinosaur fossils that received the same heat and pressure that the micro organisms did would have been broken down completely and formed into oil and gas deposits. There would have been no trace of the dinosaur left.

Oil May Have Killed the Dinosaurs

I know, I know. This heading seems flashy, but there might be some truth to it. New studies suggest that the asteroid that plummeted to the earth some 65 million years ago might have actually struck a very oil rich location. Burning oil may have caused the mass extinction of nearly every dinosaur species in existence.

Why is this important?

It implies that if the asteroid had struck a different location, that it’s possible the dinosaurs could have continued on. Who knows how long they would have lasted, perhaps surviving long enough for humanity to arrive. Interesting to ponder.

If you want to learn a little more about how the dinosaurs went extinct, check out my full article about the history of dinosaurs.

Did tar pits exist with dinosaurs? There isn’t any evidence to suggest tar pits existed as far back as the dinosaurs. One of the most famous tar pits, La Brea, only has specimens dating thousands of years back, not millions.

It’s easy to see how people came to the conclusion that dinosaur fossils gave us our modern fuel sources. The word fossil has long been solely attributed to dinosaurs, so the common conclusion for most is we fill up our cars with the decayed bones of ancient beasts.

The real truth, though not as interesting, is that our fuel is derived from fossilized micro organisms. Just doesn’t have the same ring to it, does it?

Maybe we just need to have a bit of ignorance here and allow the masses to have a more fanciful view on how these fuel sources exist. Then again, many would say these fossil fuels might be extinct too soon for it to matter anyway.