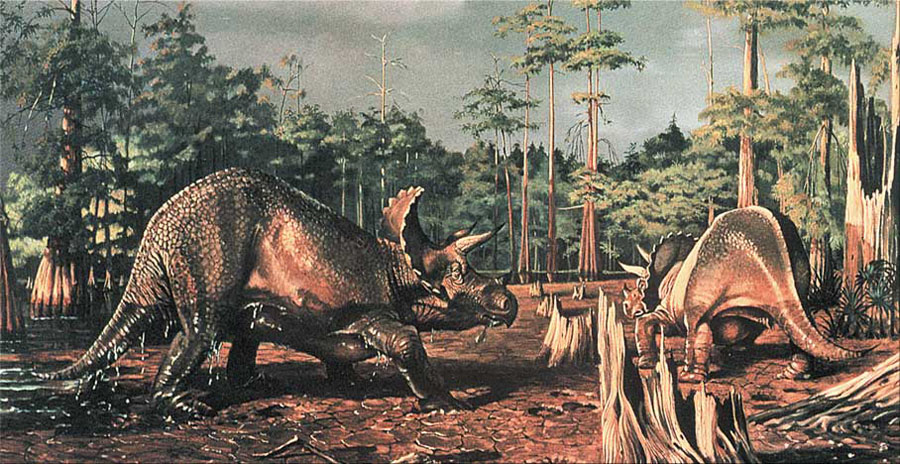 I need to come clean about something: I didn’t know all of the dinosaur periods until I started writing this article! I knew of the Jurassic period of course, because of the movie, but I wouldn’t have been able to tell you the rest. Shame on me, I know.

Why am I telling you this? Simple. I don’t want to be seen as an expert. I just really love learning about dinosaurs and this blog is my way of sharing what I learn. Anyways, let’s dig into this!

Turns out there’s three distinct periods that all form the Mesozoic Era (the entire time the dinosaurs were around). The three periods are as follows: Triassic, Jurassic and Cretaceous. The Mesozoic Era ran from around 252 to 65 million years ago and is largely considered the ‘Age of Reptiles’.

I’m torn on which period is my favorite because I love the word Jurassic but the t-rex existed in the Cretaceous. Tough call!

Why the Mesozoic Era is Split Into Three Periods

We now know about the three distinct periods of the Mesozoic era, but why is the era split into three pieces? According to the website Active Wild, the era is split into the three periods because of the layers of rock that geologists have found that separate each time period. The entire era is a part of a geological timescale and each of the periods is also subdivided into epochs.

The geological breakdown goes as follows:

Let’s dive into the different periods and find out more!

The dawn of the dinosaurs! This period is the beginning of the titans’ reign. The Mesozoic Era, though not technically the first era, is definitely one of the most interesting! The planet sees a lot of shifts in it’s inhabitants around this time as ancient reptiles begin to be replaced by the dinosaurs and newly evolved mammals.

Scientists believe the planet consisted of one large continent called Pangaea, which means “All Earth”.

Ever wonder what it would be like to live back then? Turns out there was no grass or flowers, the seasons were very dry (with a short wet season), the few scattered forests were basically all coniferous and the inland areas were largely deserts. Sounds great, doesn’t it?

Most of the dinosaurs found in this period came in the Late Triassic.

Dinosaurs That Lived in the Triassic Period

There are no notable dinosaurs that existed back in this period, unfortunately! I know, I was surprised too. I reviewed the following list several times desperately trying to find one that would be even remotely known by people. The only one that’s close is the Eoraptor.

Try to say any of these dinosaur names three times fast, I dare you!

Just like the megalosaurus, being first doesn’t always guarantee history will shine well on you.

Either way, these dinosaurs evolved for a reason. The landscape was harsh and old reptilian life couldn’t cut it anymore. The Triassic was a turning point that helped make way for the most well known period of the three.

Now we’re talking! This is the period most people know about. It includes some of the most well known dinosaurs such as the stegosaurus and brachiosaurus. Our good friend the megalosaurus makes it’s appearance here as well.

Pangaea begins to separate into two continents divided by an ocean. With the increase of water from the shifting continents, the previously dry climate from the Triassic is now much more tropical. There’s now more of a balance of palm style trees and conifers but still no grass or flowers. Sorry!

Dinosaurs got A LOT bigger in this period. Sauropods (dinosaurs that walk on four legs and have long necks and tails) show up here, the longest of which are upwards of 90 feet long.

To find out which dinosaur was the longest, check out my article all about dinosaur lengths.

Allosaurus, a much lesser known carnivore, stalks it’s prey, trying to catch any stragglers from the herd.

Dinosaurs That Lived in the Jurassic Period

As we’ve found, the dinosaurs in the Jurassic period were much bigger than the Triassic.

Here are some of the notable Jurassic dinosaurs, broken down by their type:

On to the final act of the dinosaur theatre, the Cretaceous.

Cretaceous Period (About 145 to 65 Million Years Ago)

This period is by far the longest and also contains the dinosaurs final moments. Mass extinction is imminent and the dinosaurs are completely unaware.

We finally have some grass and flowers this time! With that comes an increase in bugs and birds, a newly evolved form of life that will live on a lot longer than their reptilian counter parts. There are other more modern forms of life present here as well, such as turtles, sharks and much more.

The planet changed quite drastically over the Cretaceous. The changes in precipitation continued. The temperature steadily rose into the middle of the period and then dropped pretty drastically after spiking. By the end of the period, the world was seeing much cooler temperatures. Seasons actually started forming (much like we have now).

This period also boasts my favourite dinosaur of all time, the Tyrannosaurus! The t-rex was a late comer to the dinosaur party, but also packed the most punch! Save the best for last, I suppose.

Dinosaurs That Lived in the Cretaceous Period

This period had some familiar faces, as well as some other lesser known species. The sauropods that ruled in the Jurassic continued into the Cretaceous.

Pterosaurs ruled the skies, being complimented with much smaller, and much less threatening, birds. I wrote a pretty cool article that goes in depth as to how birds came about and the purpose of feathers for dinosaurs. Check it out!

The waters saw some of the biggest beasts reigning, the mosasaurs being the biggest players. The tail end of the period saw the rise of the triceratops and tyrannosaurs.

Here are some of the notable dinosaurs found in the Cretaceous, broken down by their type:

Where the Dinosaurs Came From

Now that we’re all up to speed on the different periods the dinosaurs lived in, let’s ask the real question here: where did they come from in the first place?

According to Wikipedia, dinosaurs came from a single lineage of the archosaurs. Archosaurs were ancient reptiles that were one of the very few species to make it through the Permian-Triassic extinction event. With the Earth in such a dry, hot climate due to the changing environment, the dinosaurs flourished because of evolutionary traits that helped them

One major evolutionary trait dinosaurs had over their predecessors was found in their sweat. When dinosaurs would sweat they would use far less water than the more ancient reptiles, giving dinosaurs the edge in the dry environment found in the Triassic period.

Why the Dinosaurs Died Out

There are two working theories as to why the dinosaurs went extinct en masse at the end of the Cretaceous period.

The first theory is a large comet or asteroid collided with the Earth, causing large volumes of smoke to enter the atmosphere for months or even years, blocking the sun. Plants and vegetation died out, causing food to become too scarce.

The second theory is something called volcanism. With all of the shifts in the continents and tectonic plates, the volcanic activity increased to such large levels that it caused smoke to go in the air the same way as in the asteroid theory.

I personally am on the side of the asteroid, but who knows. Maybe both happened simultaneously!

Either way, it’s theorized that the dinosaurs died out because the sun was blocked for too long, causing food sources to disappear. Only smaller creatures could survive on the decreased food supply, causing the end of the dinosaurs for good.

The Mesozoic Era stretches a vast amount of time. With it broken up into different periods, we can see the natural evolution of the dinosaurs and even the planet. It’s impressive to know how long the dinosaurs truly reigned here and it can perhaps give us hope that we can do the same.