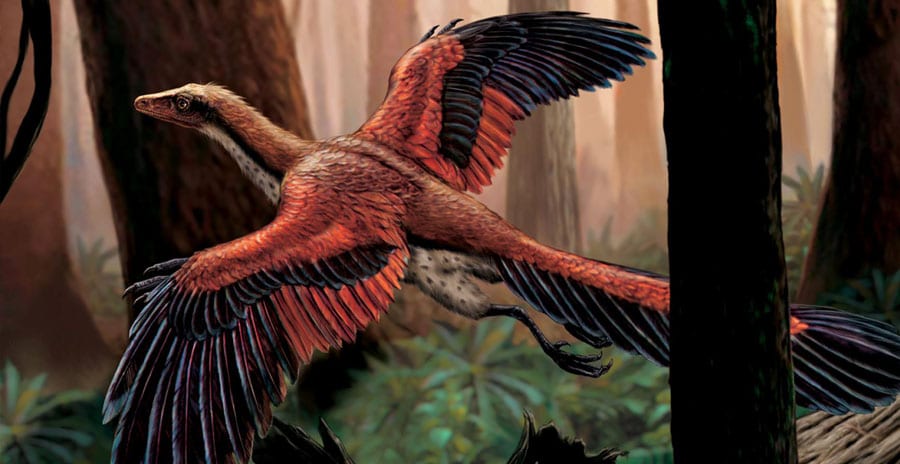 I was taking a walk the other day and came across a feather on the ground. It got me thinking about how cool it is that birds are basically modern day dinosaurs! My next thought was: we know birds have feathers and can fly, but did flying dinosaurs have feathers?

Some flying dinosaurs did have feathers. The Archaeopteryx, often considered the earliest known bird, was feathered and could fly on its own. In fact, there are dozens of other flying dinosaur species that had feathers as well.

Just like modern day birds, ancient flying dinosaurs likely used feathers as a way to aid with flying, to insulate their bodies and to also help with waterproofing. They also could have been used in mating, with bright colors being used to demonstrate sexual prowess. We’ll talk more about this in a minute.

Why Dinosaurs Had Feathers

All modern birds have feathers. Feathers help with flight by giving birds a large surface area to push against the air as the wings come down. The feathers then separate when the wings go back up so air can pass through.

Feathers, however, are not required to be able to fly. Think about how people are able to fly with gliders and other wing-like devices. The same goes for flying dinosaurs like the Pterodactyl.

So why, then, did some flying dinosaurs have feathers?

Flight was never actually meant as the main purpose of feathers! Instead, consider it more of a by-product.

As I’ve already briefly mentioned, the main purpose of feathers on dinosaurs, much like fur and hair on modern mammals, was to insulate and help control body temperature. They were a coating that helped the dinosaurs maintain body heat, and to also stay dry in rainy periods.

Feathers, through situational evolution, eventually became an aid in gaining lift for some dinosaurs. This is how the first few dinosaurs likely started to fly in a limited fashion, by accident, really! It would have been a great way to escape predators or to be a better predator.

The following is a complete list of all the flying dinosaur species that had feathers:

For more detailed information on each of the above flying dinosaur species, and for a good book to read, check out John Pickrell’s website flyingdinosaurs.net.

So now that we know some flying dinosaurs had feathers, we need to find out how that happened. The link actually lies in the Archaeopteryx.

First discovered in 1861 in Bavaria, Germany, the Archaeopteryx is a combination of two ancient Greek words: archaīos, meaning “ancient,” and ptéryx, meaning “feather”. Archaeopteryx is thought to have lived about 150 million years ago in the late Jurassic period, right around the same time as the megalosaurus.

Recent evidence has shown that the Archaeopteryx could actually fly (similar to a pheasant or chicken), though not very well. It’s considered the first bird, but was it just a bird?

The Archaeopteryx is largely considered the connection between dinosaurs and modern birds, possessing traits on both sides. It had the size, feathers, head and beak of todays birds but the tail, teeth and wing structure of dinosaurs from its time. It took the best traits of both and flourished because of it.

How Birds Help us Learn More About Dinosaurs

Modern day birds are considered descendants of dinosaurs and as such share many of the same traits as them. Things like nesting, plumage, mating and much more are derived from their ancient ancestors, the dinosaurs.

It’s been known for decades that modern-day birds (or extant birds) evolved from the theropod dinosaurs (two legged meat eaters). With that in mind, we can actually study birds of our time and learn behaviors and traits they might have had in common with their ancient, bipedal ancestors.

One example of what we can learn from todays birds is: they sometimes use their own feathers to create their nests. They’ll pluck feathers from their body and use them to construct their home. There’s a good chance dinosaurs did the same.

The flying dinosaurs likely would have even more reason to do this, as they would have had a chance to create their nests in the trees and would have preferred to avoid the ground.

We’ve briefly discussed some of the advantages that feathers give but I’d like to go a little deeper on this. As I’ve said, the main advantage dinosaurs had with feathers was the ability to control their body temperature. As the world started to cool in the late Jurassic and Cretaceous periods, coverings like feathers or fur would have been an excellent evolutionary advantage.

The idea of feathers helping with dinosaur’s body temperature brings up a major debate regarding them being warm blooded vs cold blooded.

If dinosaurs were warm blooded, having feathers makes sense. The feathers help the body efficiently maintain it’s temperature giving dinosaurs the ability to maneuver quickly and not require any extended period of sunlight.

If they were cold blooded, however, then the feathers would have been useless bringing up some strange questions about why they were even there in the first place.

On top of bodily function, feathers also helped dinosaurs stay dry. Down-filled feathers can act almost like a coat, shielding water from getting to the main body.

Because dinosaurs nested similar to modern-day birds, their shelters would have been very basic and it would have been important to have methods of staying warm and dry.

Another huge advantage of feathers is something called plumage. Many modern-day birds use bright colors to communicate with other creatures.

The best example is probably the peacock, who uses plumage as a way to attract other peacocks, or to scare predators away. Dinosaurs likely would have used feathers the exact same ways, putting on displays of beautiful colors to attract or deter other dinosaurs.

Were there any flying dinosaurs with more than two wings? There were 4-winged dinosaurs! It’s actually thought that dinosaurs with four wings were an evolutionary inbetween for dinosaurs evolving into true flapping flight.

Did triceratops have feathers? There isn’t any evidence that triceratops had feathers. Paleontologists believe they had scaly skin, much like the sauropods from the Jurassic period.

While some flying dinosaurs did in fact have feathers, it’s not a required trait to be able to fly. The main reason they likely had feathers was to control body temperature and help survive the elements. Flight was a great by-product for the dinosaurs that evolved into it.

And now we get to see this extraordinary evolution every day in modern day birds! Feathers found on the ground are akin to relics from the past.