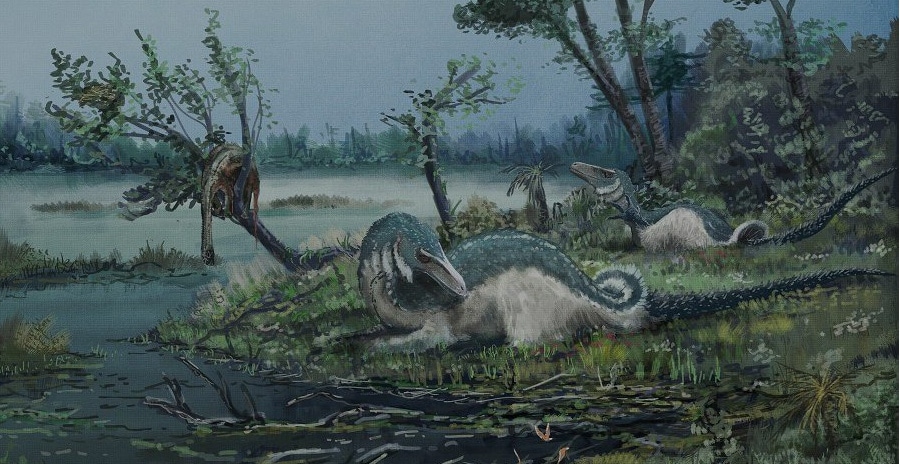 Most species on the planet sleep at night. There are, however, the odd nocturnal animals around – or people who work night shifts – that sleep during the day. It makes you wonder, though: did dinosaurs sleep at night?

The dinosaur ecological system seems very similar to our current one, with some animals sleeping during the day and some during the night. Let’s look at the advantages of sleeping at night versus the day and also how we even know how dinosaurs slept in the first place.

So which dinosaurs were diurnal and which were nocturnal?

The sleeping habits of the dinosaurs has long been in question by paleontologists. Just like we can determine the average speed of a dinosaur by using fossilized trackways and references to current day animals, we can use similar data to determine how they slept.

Examples of dinosaurs that were likely nocturnal:

The length of sleep the different dinosaurs had is nearly impossible to determine given the fossil record.

This kind of speculation can only come from the modern world. We can take modern references and apply that same logic to dinosaurs with similar features and natural status.

For example, it’s proven that certain animals today only sleep maybe two to three hours at a time and in herds (like cows and sheep) for added protection against predators.

The same can be assumed for dinosaurs. Perhaps the stegosaurs or hadrosaurs slept a few hours at a time and in herds the same way.

Carnivores are known to sleep more than herbivores on average so the same can be assumed for the ancient world. Tyrannosaurs likely would have slept any time they felt like it without worrying about threat of attack.

The actual sleep lengths are impossible to know, however. We can know modern animals sleep durations by actively monitoring them, but we have no way of doing the same thing for the dinosaurs.

The dinosaurs that would have likely slept 3 hours or less at a time:

The dinosaurs that would have likely slept 3 – 8 hours at a time:

There have been several dinosaur fossil discoveries that directly show that some dinosaurs curled up and slept just like modern day birds.

A full fossil of a dinosaur called Mei long was discovered back in 2004 and it had the dinosaur laying in a sleep position.

Most full fossils that are found are in the typical death position: tail curved back and up, head curled nearly backwards towards the spine. The reason this position happens is because of post mortem rigor mortis.

So to find a fully preserved skeleton in a sleeping position means the dinosaur died nearly instantly and in its sleep.

When it comes to other dinosaurs, though, we have almost no way to know how they slept. Once again we need to consult our modern world to see if there are any clues.

Modern day cows and horses sleep standing up. Some animals sleep upside down, others sleep sitting in trees, while others even sleep in the water (with extra air pockets helping with buoyancy).

The same can likely be said for dinosaurs. Their size and status in the natural pecking order would have determined their sleep style.

Examples of dinosaurs that might have slept standing up:

Examples of dinosaurs that might have slept in a sitting position:

Examples of dinosaurs that might have slept in a laying position:

Of course there are many more dinosaurs that could have slept these ways and might have slept in different ways than I’ve described above. We can’t know precisely how they all slept. These are our best guesses!

Dinosaurs Had Nightmares Too

Everyone at one point or another likely had a nightmare about a dinosaur attack. Whether you watched Jurassic Park as a kid and had night terrors about the raptors, or just find some dinosaurs scary in general, we’ve all been there.

But did you know dinosaurs likely had nightmares too?

There was a study done a few years back that found modern day reptiles actually sleep in two stages. This suggests that they also have a REM stage like birds and mammals do.

REM is short for Rapid Eye Movement and it’s the part of the sleep cycle where dreams are associated. Every person enters the REM stage multiple times while sleeping, and apparently so do reptiles.

This suggests that it’s possible dinosaurs also had a REM stage when they slept. If dinosaurs dreamed there’s a good chance they also had nightmares.

I wonder what a dinosaur nightmare even looks like. Most likely some sort of predator getting them or something. Scary!

Did dinosaurs sleep in caves? It’s definitely reasonable to think that some dinosaurs slept in caves. We know that they created nests similar to modern day birds so caves would not only offer a convenient location to place the nest, it would also give reprieve from predators and the elements.

Did T-Rex sleep standing up? There is no known answer for this question but based on the fact there’s no two legged animals that do this today, it’s pretty safe to say that T-Rex’s didn’t sleep standing up. It’s more likely they either slept resting on their pubic foot (or pubis) or by fully laying down.

It’s fair to say we both know and don’t know a fair amount about the sleeping patterns of dinosaurs. Using the current animal kingdom as a reference, we can estimate the time and the way that dinosaurs slept based on what kind of dinosaur they were.

The fact that we can have such a close vision of how the dinosaurs behaved is an incredible feat given the evidence we have to work with.

By analyzing and studying fossils it gives us a unique view on a world long gone. It also reminds us our current animal kingdom is more similar than different from the ancient world. Very neat, indeed!

Continue Reading
link to What was the Longest Dinosaur?

Ever since I first saw that amazing shot of the brachiosaurus clipping some leaves off a tree in Jurassic Park, I've been mesmerized by the crazy size and length of some of the dinosaurs. It really...